You are here: Home / LGBTQ+ / How to Use Gender Inclusive Language with Actual Examples 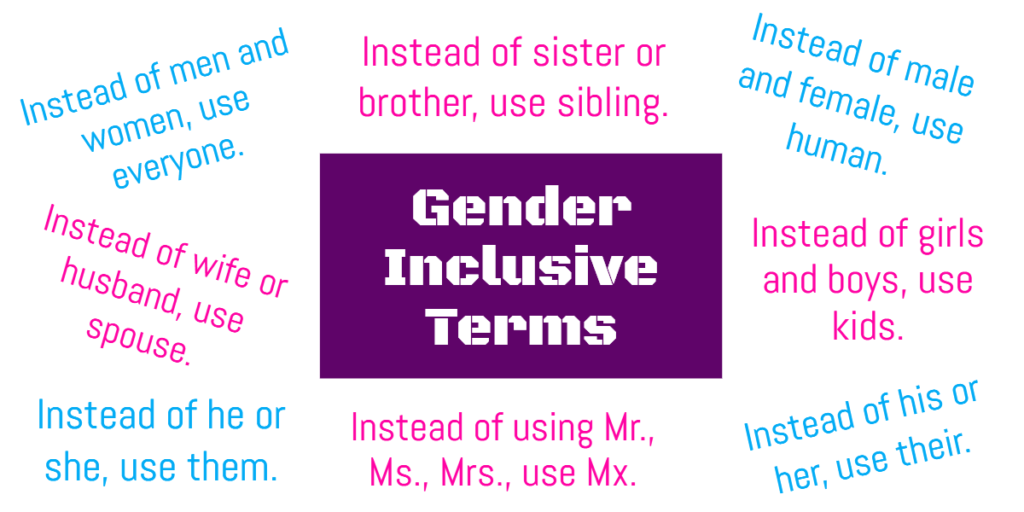 First, it recognizes the existence, equality, and presence of women within society.

Second, it recognizes the thousands of people worldwide who don’t conform to traditional gender roles and expectations.

Third, it is inclusive of people who embrace a range of gender non-conforming (GNC) identities.

For this reason, this article presents traditionally gendered terms, followed by simple gender neutral alternatives with which you can substitute them.

I’ve even broken them down by category for your convenience. Enjoy!

If you’re feeling a little more creative, you can also use the adorable gender-neutral terms joyfriend or theyfriend.

I am often asked why gender inclusive language matters, and the answer is, it is important for equality.

While gender fluid, nonbinary, and gender non-conforming (GNC) people have existed across all cultures and time periods, these identities are becoming more visible than ever. In recent years, celebrities have begun to openly express their nonbinary identities, activists have been challenging the gender binary, and influencers on social media are embracing a wide range of gender expressions.

Together, these forces are supporting a swell of (long overdue) attention around gender inclusive language.

As explained by Alok Vaid-Menon, a gender non-conforming artist, “All language was invented. That people don’t get mad when new words like ‘tweet’ and ‘hangry’ are developed and recognized, they get mad when new words about gender and sexuality are. The purpose of language is to make meaning — we are constantly creating new ways of fashioning language to be more particular, nuanced, and precise.”

Put simply, words can empower, words can free, and words can be used to respect and recognize the existence of both individuals and groups of people. Being recognized within the lexicon is important.


Or as I say: Language matters.

What did you think of this list? Were there new ideas for gender neutral terms that you found helpful?