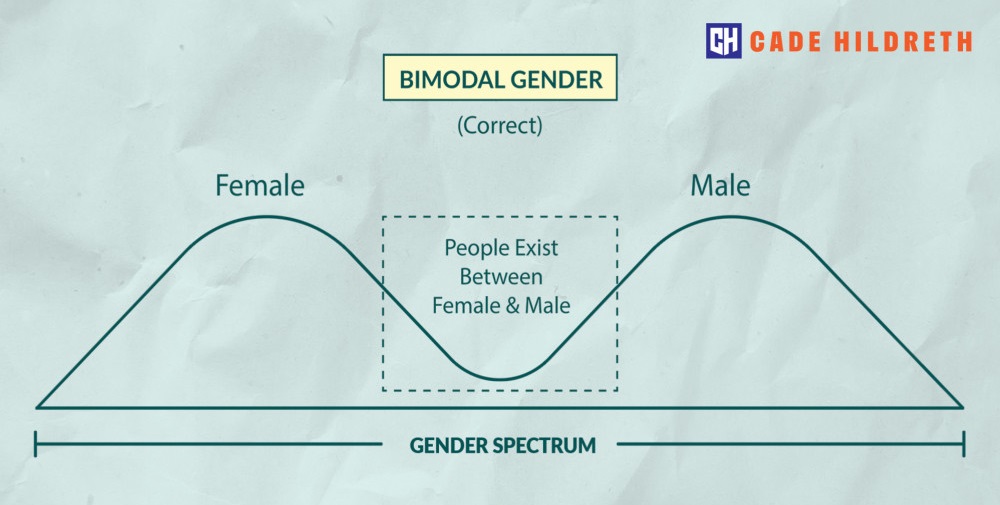 In contrast, the gender binary—also called gender binarism or genderism—is a belief that gender is composed of two distinct and opposite genders (female and male) in which there is not overlap.

Unfortunately for those who believe in a gender binary, it is not scientifically or medically correct. Gender can’t be binary, because it is a personal identity and is socially constructed.

Today, numerous scientific fields, including biology, endocrinology, physiology, genetics, neuroscience, and reproductive science, have confirmed that both sex and gender exist as a spectrum.

This is true for humans and across the animal kingdom.

When using the terms sex and gender, it’s important to note that “sex” (female/male/intersex) describes biological traits. In contrast, “gender” is a broader term that reflects how a person lives within society. One’s gender identity could be woman, man, transgender, nonbinary, or an infinite number of other possibilities.

For all too long, the government, the medical system, and even our parents have assumed that sex is binary. Based on science, this is not biologically or medically accurate.

On average, males do have penises, and on average, females do have vaginas. This is what allows for reproduction. However, there are many examples where this is not the case, such as intersex people. External genitals (a biological marker of sex) present across a spectrum from full-size penis to small penis to micro-penis to clitoromegaly to enlarged clitoris to standard-sized clitoris.

On average, males tend to have more facial and body hair than females (a secondary sex characteristic), but there are also females with coarse and dense body hair and males who can’t grow a full beard.

As explained by these examples, sex is not binary, because people cannot be grouped into two separate, non-overlapping groups.

However, bimodal sex characteristics are not uncommon.

Bimodel means the presence of two (“bi”) statistical modes, which can be seen as peaks in a graph. The two modes represent probability clusters.

With regard to human sex, this means that for some sex characteristics, there may be common norms among people whom we tend to assign as “male” and “female.” However, there are also clearly overlaps present between the peaks. This is what makes sex bimodal, and not binary.

Finally, at risk of getting too mathematical, a bimodal distribution is by definition, a continuous probability distribution with two different modes.

In other words, it is a spectrum that has clusters.

At the time of birth, a newborn’s genitals are usually labeled by a physician as male or female, even if the newborn presents with sex organs or characteristics that are intersex, ambiguous, or undefined. In a few places, such as Ontario (Canada), 19 U.S. states, and Washington, DC, “nonbinary” or “gender unspecified” options now exist, but this is not yet the norm.

Intersex means that a person was born with variations in their sex characteristics, such as the biological markers described above. These can include: internal genitals, external genitals, gonads, chromosomes, gene expression, hormone levels, and brain structure.

The following examples explain this lack of consensus:

As these questions illuminate, sex may be a spectrum for people who have not been classified as intersex as well.

Furthermore, even a newborn born with “binary” sex chromosomes (XY or XX) can present with intersex characteristics.

For example, either the fetus or the mother’s adrenal glands can produce elevated levels of androgens. When this happens, an XX (“female”) child can be born with a phallus (small penis). In some cases, these newborns may will appear to have a scrotum, due to the labia fusing together.

Other biological conditions can create similar incongruities between chromosomes and genitals. This is why it’s unfortunate that federal and state-issued documents use external genitalia to make a sex assignments.

Of course, sex and gender are not fully separate from each other. Across many cultures, they are intertwined.

Why a Gender Spectrum?

Now that we’ve confirmed the existence of a sex spectrum, what about a gender spectrum?

However, as a scientist, I can tell you that gender is also complex, and across all species, exists as a spectrum.

Currently, gender gets assigned at birth based on external genitalia, but there are at least ten medically accurate markers of gender (and likely more).

Biological markers of gender include:

The brain is another biological marker of gender that presents with great diversity, further supporting the concept of a gender spectrum.

The Role of the Mind versus the Brain

The brain is the physical structure in your head that is composed of grey and white matter. It has neurons firing within it and uses neurotransmitters as chemicals messengers.

As noted by Julie Bakker (lead researcher in the MRI study above) and others, brain structure and activation patterns present along a spectrum.

Sex and Gender Identification at Birth

As described above, external genitals are not an accurate marker of gender to use at birth, because they are one of at least 10 biologically relevant markers of gender.

External genitals are also highly variable across our species, may be ambiguous, and potentially can have both male and female sex organs present.

Furthermore, performing this gender assignment at birth based on external genitals does allow a physician to integrate information about the child’s internal genitals, gonads, chromosomes, gene expression, skeletal structure, brain structure, and most importantly, how the child will grow up and express themselves within society.

In short, sex and gender exist as a spectrum for humans and animals (and in fact, plants too). We might as well embrace it, because after all, natural variation has caused the rise of our species to 7.8 billion strong!

Do you have questions about the gender spectrum? Ask them in the comments below or contact me here.

Anyone else need to channel a little David in the

We’re you taught these tactical tips for handlin